Does anyone remember the monster batik wave quilt top I finally finished piecing a couple of months ago (hopefully my sister does as its for her!)

Today I finally got it basted.  As it's approximately 3m square I've been having trouble finding a suitable space in which to lay it out.  But at today's Bath Quilters Sewing Day, using an adjoining room (apologies for being somewhat antisocial) and taking the best part of 3 hours to press, layer, baste and grab a quick lunch it was done. 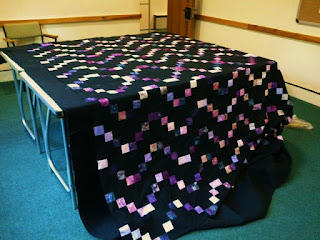 (Basting in progress on a large table)

And as I think I've figured out how to quilt it (though still toying with the easy option rather than the correct option!)  This will hopefully be done by the end of Nov.

I seem to be in the mood for finishing off, partly to clear a little space, but mostly so I can start new projects which I have planned!
Labels: Bath Quilters Batik Quilt

I'm a thirty something year old who has been crafting since I was first handed a French knitting bobbin at the age of six. I have since learned to knit, cross stitch, and sew. In very recent years I have been seriously bitten by the quilting bug, learning through classes in quilt shops and via the online community. I enjoy lots of varied hobbies, most of which will make an appearance on this blog at some point I'm sure.